From Costumes to Face Masks

From Costumes to Face Masks

It was March 18 and I was on a field trip to Hill Auditorium in Ann Arbor. We were a week away from opening night for Frozen, the musical that we had been working on for months. I was making the costumes and my younger boys were in the show. When we were driving back from Ann Arbor, we kept getting notifications that things were closing down. At rehearsal that afternoon, we discussed the possibility that we would not be able to perform our show. The next day the kids were told that at the end of their half day on Friday they should take their belongings from school because we didn’t know when we would be back. Everything was shutting down. Schools were closing, our show and others were being postponed or canceled. Sporting events were canceled.

That Friday night I read a post on Facebook from a friend about how St. Joseph Mercy Hospital needed homemade masks for their nurses and doctors. I thought, “Well I’m not making costumes; I can do this.” I met up with my friend at JoAnn’s the next day and we bought supplies. I watched videos on how to make a face mask and made my first mask that afternoon. Since then I have made masks for healthcare workers at St. Joe’s and U of M. I have made masks for disaster relief programs. I have made masks for friends so that they can go out in public and feel safe. A few weeks ago, my friend Sue Regner asked me to make scrub caps for her son in law and her grandson. I made a few for each of them and then their coworkers started asking for caps. And then other hospitals heard about the caps. Sue and I are now making scrub caps for healthcare workers from 5 different hospitals. It’s humbling and life changing to know that this little thing that God asked me to do has turned into this huge thing that God is still asking me to do.

As the project grew, I found that other friends were also making masks and caps. We had a family from St. Luke contact us looking for a way to be involved in the project so they spent a weekend tie-dyeing fabrics for us. 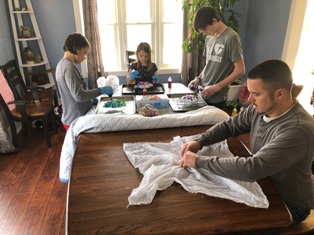 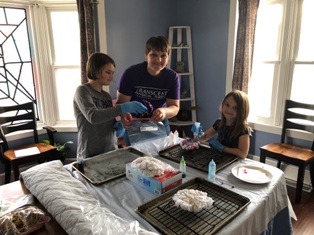 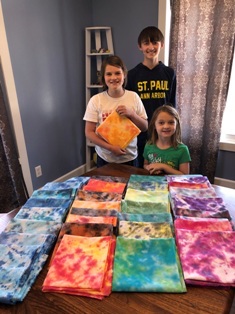 I worked closely with my friend Sue through the whole process and we had many conversations about what we were sewing and how it was affecting our lives. Sue’s whole family was involved in her project and she said “It was Covid chaos in our house. Such a fun thing to do. It has been fun partnering with Kelly and getting excited over new fabric that so many people donated. When my father worked at Douglas Aircraft during the war, he would be given “win the war ” awards. I’m going to look for that and make some for my friends that have been sewing….it really is more blessed to give than receive.” Some other friends also shared their stories, and this is what they had to say, Rachael Varblow: “My fabric stash is depleted, and I’ve finally seen what empty serger bobbins look like. I had to redesign my daughters’ Easter dresses after using up all the elastic in Dexter, including what I had intended for their dresses. I have to set limits on mask making because of health problems. I keep overdoing it.” Nancy Delnay: “I like to help people. God gifted me with mercy. As a nurse, it is one more way I can help. Also, my husband is a nurse working on a Covid unit at St. Joe’s so I wanted to help.” Lisa McCleary: “I feel grateful that I can help the people who are putting their lives at risk to save others.” Patti McCarty: “I have been making caps for my daughter and the other people that she works with who have long hair. It has helped me feel useful to use my sewing skills for other people.” Pam Kamrath: “This was perfect as I could easily do this project. I began sewing and praying over the finished masks that those who would receive them would be protected from this virus. To know that I helped out even in this small way made me feel that perhaps I was being the hands of Jesus to others.”

The common thread amongst all of us was that the masks and caps were prayed over as they were made so that they would be a blessing to whomever receives them.