He is Our Hope and Our Rest

He is Our Hope and Our Rest

A friend  and family member of St. Luke, Sarah Crowder is a teacher at Faith Lutheran Middle School & High School in Las Vegas. The school body was affected by the Las Vegas shooter that took many lives on Oct. 2. Sarah took this opportunity to share her story on Facebook, and has given us permission to share it on our blog as well.

I know that sharing helps with grief and I really need a nap, but I’m going to write out what’s happened the last 14 hours.

At 2 a.m. I have an alarm set to check [my daughter] Katie’s blood sugar. She had a low at bedtime so I checked and she was hovering around 85, so I gave her 1/2 a juice and lowered her temp basal 30%. I’ll check in another 20 minutes to make sure she’s ok. I check my phone and I see [our exchange student] Erica sent me a message “I’m terrified” at first I thought there was a scorpion in the house. But then I saw the news report she linked to: Las Vegas shooter alert on Strip. I checked the news and Facebook. I just was amazed at what damage someone could do. I didn’t watch any videos, I didn’t want to wake [my husband] Jason up. I tiptoed downstairs to check on Erica, all her lights were out and I didn’t want to wake her. I made sure all the doors were locked.

3 a.m. and Katie was leveling off at 100, then I checked my school email and was hit with another wave of grief. We had students injured, shot and waiting for surgery. I had one of the girls her freshmen year. I can’t imagine what their parents were feeling, the pure terror! Then more reports of students who were at the event, posting photos and videos of the moments of terror. I reinstalled twitter to see if I could find anything out, lots of stories of students praying for the girls and trying to get updates.

4:30 a.m. I woke up Jason. I thought I should let him sleep, but if it was me, I’d want some time to process things before telling the kids and rushing off to school. Jason read the news and then at 5 quickly took a shower to try and give blood. He is O negative.

5:45 a.m. I sent an email to my Applied class, they are the students who will lead chapel on Thursday. It read:

Hey Guys,
We had a terrible, tragic, horrific, and incomprehensible event happen in Las Vegas last night. Over 50 people dead, and over 200 people injured. Our Faith Lutheran Family will be coming to school today tired, confused and upset. Be lights in the darkness guys! Be looking for those who are struggling and point them to a counselor. Be pointing conversations to scripture and not to gossip. Be taking time for yourself and make sure you spend some quiet time in the WORD and in PRAYER. I am here for you. You text me if you need anything. We are in some dark times guys, but listen, JESUS is our light. He knows our pain, he knows the sadness of death. The good news is that Jesus is not satisfied with how this world is, full of sin and hate. So he willingly went to the cross to make things right. We have this hope, let us cling to Jesus.
Love you guys! Go Love one another for Jesus! It’s what He has called us to do.
Mrs. Crowder

I started waking up the kids, trying to figure out what I’d tell them. My poor kids! Living in such a world. Before we ate breakfast Jason came home. The first donation center was shutting down and sending everyone to another United Blood Services donation place. When he got there is was PACKED, no parking, he rolled down his window to ask what the wait was like and was told it would be 3 hours.

He came home and we told the kids over apples and oatmeal: There was a horrible thing that happened in Las Vegas last night. There was a shooter who injured a lot of people and killed a lot of people. The shooter was caught and is dead. It looks like he was acting alone and not a part of a terrorist group. But many people are affected. Two students at Faith are shot, but are recovering. Some of your friend’s parents are policemen, they might be very upset today. It is a sad day for our city. Brendan wanted to know if any policemen were hurt. I said there were. Brendan finished most of his oatmeal, I could tell he had a lot of questions in his head. Jason led us in a prayer and we headed out for the day.

6:45 a.m I arrived at school and was wearing pajamas and a robe… It’s homecoming week and PJ day is a student favorite. I thought maybe it wasn’t appropriate to dress up for fun today, but then I thought that it couldn’t hurt to be extra fuzzy on this sad day. I checked facebook before faculty devotions at 7:20. I wanted to open my classroom to students to come and pray, but my principal told me that we would all gather as a school to pray at 7:45. Good. We need that. Announcements were made, our 6th grade student teacher was at the event, we had many students at the event, many were going to be absent. We need to try and give the students a “normal” day. Emily gave devotion, reading a beautiful prayer from the hymnal. We all prayed the Lord’s Prayer “deliver us from evil” struck a chord with us this morning. One of my applied students had been texting me, wanting to get a blood drive together. She found me at the library and was crying and exhausted with her friends. I hugged both of them and encouraged them to try and get a blood drive on campus. I tell our head counselor who is going to lead the prayer meeting that if he’d like a song, I could bring my guitar. He said, “that would be great, but I don’t know what song.” I told him I’d think about it.

On my way to class I saw one of my applied students who looked really tired, I knew from twitter he had a rough night, but I didn’t know exactly what happened. I put my arm around him. I asked, “are you doing ok?” He shrugged and told me how he was working at the event last night but was sent home early. He got paler as he told me how his friends who stayed behind to work were running and saw the bullets hitting the ground as they ran for cover. I didn’t know what to say. I told him, “I’m so glad you are here!” I asked him if there was a song that all the high school could sing together, what song would he pick? He thought for a second and responded, “How Great is Our God.” I was struck, not a song I would pick, but YES the perfect song in this dark time.

First Block: I quickly found the cords, I tried to print them out, but the printer was broken so I just brought my class, guitar, and computer to the assembly. On the way there I saw one of my absolute favorite students who I had freshman year, now a senior. She needed a hug, but it wasn’t good with the guitar and computer in tow. I’ll have to get another later. Then we had the assembly. NEVER have the students been so still. Dan did an excellent job explaining the situation of our two sisters who were shot and recovering. He said there will be good that comes from this and bad. Then he pointed us to the cross and our Good Shepherd. He reminded us that the devil lost when Jesus won over death on the cross. Then he introduced me. I only had one mic, so I used that for my guitar. I asked them to sing with a loud voice with my loud voice. It was so nice to sing with everyone. There was such a peace in hearing the beautiful voices. At the last chorus I couldn’t sing and I didn’t play. It was a wonderful heartfull moment. Then Dan closed in prayer. It was a beautiful prayer and the only time to heard the student moved, the tears that were shed and the soft sound of sniffing was a quiet background to a prayer that asked God to be with us in this hard time. We left and tried to give the students a “normal” day. 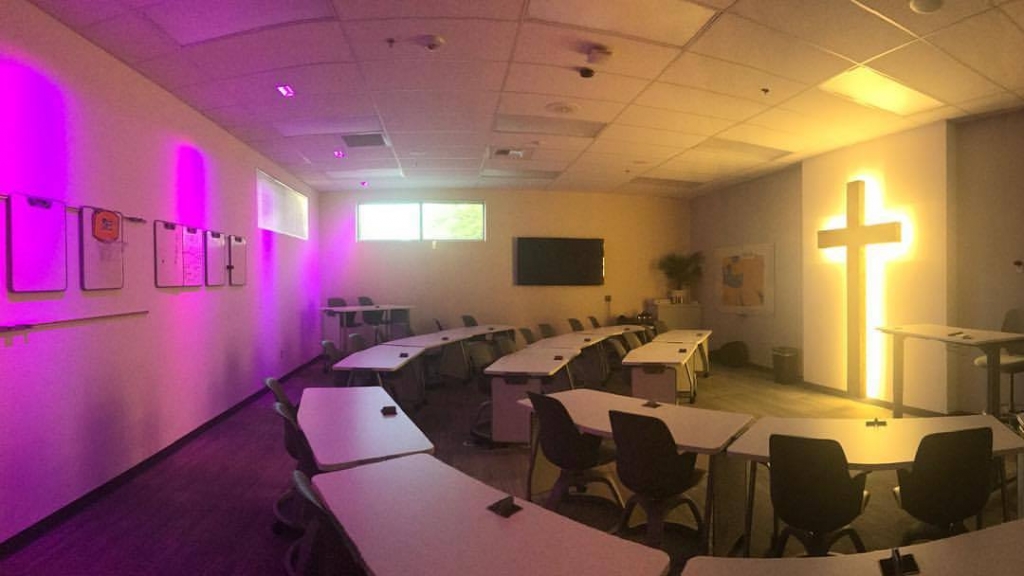 We talked about Jesus in class today. We read verses about Who He is, True God and True Man. We prayed for students and their families. One student had an aunt who was shot, another didn’t know where a friend was. Another student emailed me, he lost a family friend in the shooting. Advisory, like a homeroom, was with my seniors. I brought out my candy stash. We prayed together and got updates on the sisters, one of my student had been texting them. By the time I reached 4th block I was not 100% coherent. I did most of class from my chair, which is unusual. But we learned about Jesus, that he is unchangeable, eternal, and forgives sins. I told my students that grief is weird, and that everyone is going to experience it differently. We are going to have a whole lesson about grief in the next 10 days. That is going to be exhausting.

I took Katie and Erica home after school. Jason was ready for a nap. I wanted to record some of my thoughts about the day, because I know that it is helpful. I hope if you are reading this you can feel two things, the sadness of what happened in Las Vegas and the hope that we have at Faith Lutheran because of what Jesus did for us. Even though He is fully divine, he totally knows pain and loss and death. And when we look at the cross, we can see the love he has for us. So much to exchange his life for our sinful one. He is our hope and our rest.

So now I am going to rest. Tomorrow is a new day and another fight. There is no place I’d rather be then sharing this good news of the Cross of Jesus Christ with these precious students.

For other content related to Sarah Crowder, check out:

1,000 Pennies and Money from Heaven

I Love Your Church, O God